“Dooring” and the “Dutch Reach”

“Dooring” is a growing issue for cyclists and motorists. It occurs when a motorist in a parked vehicle opens their driver’s side door without first checking to see if anyone (such as a cyclist) is passing on the left and it is particularly hazardous for riders in urban areas. I’d like to thank Tom “The Investigator” Meyer (retired) for highlighting the issue recently on the evening news (video below) and demonstrating a great technique called the “Dutch Reach.”

As the video explains, when parking a motor vehicle and preparing to exit, reach across the body to open the driver’s side door with the right hand rather than the left, which causes the body to pivot to the left, providing an automatic view of the blind spot and who/what might be coming along the road from behind. 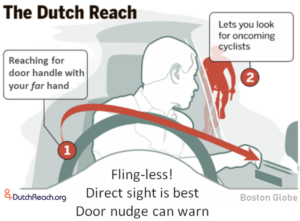 It’s a good idea for a few reasons, not the least of which is because it is illegal to accidentally “door” a cyclist!

Under the Ohio Revised Code, “[n]o person shall open the door on the side available to moving traffic unless and until it is reasonably safe to do so, and can be done without interfering with the movement of other traffic. . .”  Ohio Rev. Code § 4511.70(C). More than the misdemeanor that comes with violating this statute, but you may be liable to an injured party for medical expenses and bike repair or replacement!

The point here is that it’s incumbent upon motorists to practice the Dutch Reach to ensure that it’s 100% safe when opening their driver’s side doors for their own benefit as much as the cyclists. So, why not give the Dutch Reach a try?  You have to open your door no matter what, you might as well do it safely!